Well, the main drawing of The Four Songwriters is done and some block colouring has been started. I must be honest, I generally paint and draw “live”, but this time it’s been a laborious but interesting measuring process. I do regret the lack of detail available to me from the original photograph.

Well, to keep this painting moving in the right direction, today I have to get some help with the hands on Georgina to the left of me. I thought initially of an artist’s wooden hand model – available in any good art store. I called in on a fashion store I happened across in Charring Cross station and asked if I could purchase one of their spare mannequin hands. I explained that I needed it for an art project I was currently working on (as my regular model was unavailable at this time of the year!). She politely declined my request saying all spare mannequin parts went back to head office. Oh well. Cass Arts have just the thing but on close inspection, I found it would be impossible to interlock the fingers correctly etc, so decided against it. While there I looked at a few pallets that were reduced in price, but the finish on these were terrible – rough edges especially on the thumb hold – like a thumb guillotine! So… into Foyles and a look at books on drawing techniques- some brill, but no purchase.

I popped into the National Gallery, passing all kinds of street Artists and Musicians – Phone calls are not permitted in the exhibition areas, but of course someone phoned me just on cue, and I got told off promptly by the Gallery Staff! A short while later I stumbled upon a Guido Remi masterpiece where the hands were in a similar position to what I had been looking for. I stole a quick sketch. The Four Songwriters – Sketching A painting I had been thinking about doing on and... Read More FRANK AUERBACH at Tate Britain 9 October – 13 March What is going on here? You can... Read More 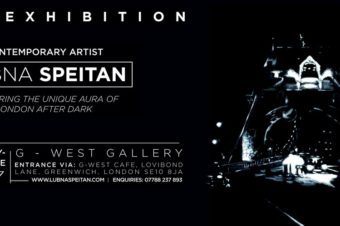 Hi All, I wanted to let people know that Lubna Speitan has some wonderful paintings... Read More